After missing the 2016 DD because I was at a Rehab facility in Chicago after my paralyzing accident, I returned in 2017 in my wheelchair, visiting the start, the lunch stop in Millvale, the top of Canton Avenue in Beechview, the top of the last hill, and the after-party at the East End Brewery. A record 453 riders started in four different groups on a partly sunny, windy day with a high temperature of 57 degrees F. Ian Baun and Stefanie Sydlik both defended their titles, and became three-time winners. However they did not lead the entire way.

In the men's race, rookie Nick Glavac from Ohio won the first hill. Rookie Will Cooper won the second hill and moved into the lead. After winning the third, fourth and fifth hills, 20-year-old Ian Baun took the lead, and held it to the end—winning a total of five hills. Here is Baun winning Canton convincingly. 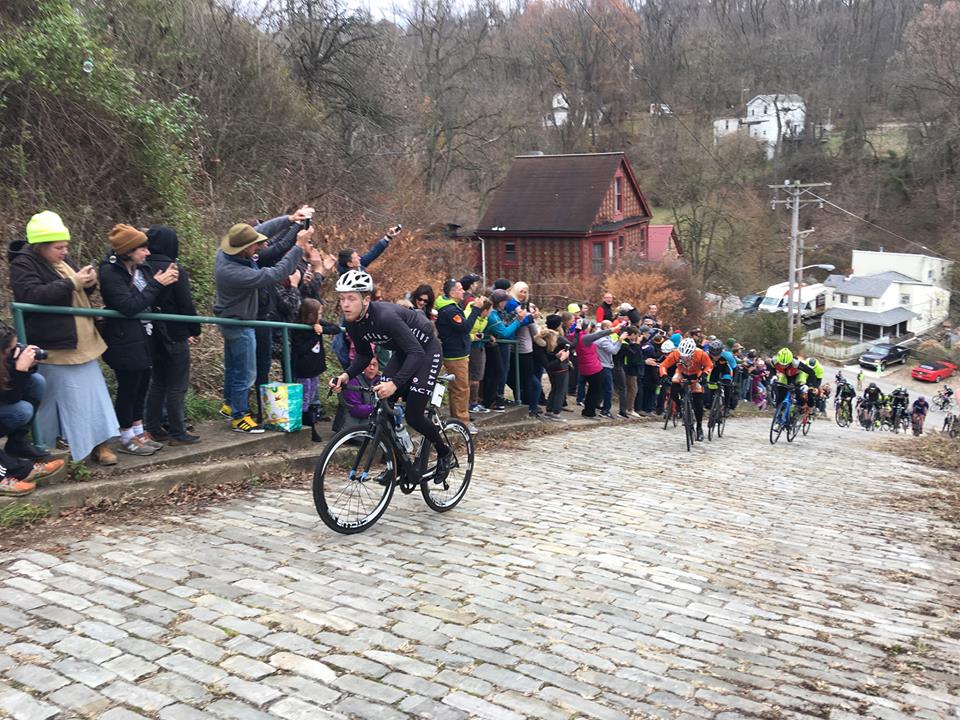 On the seventh hill (Suffolk/Hazelton/Burgess), Glavac put his foot down near the top, and despite 11-time DD winner Stevo Cummings telling him to go back down to the bottom to redo the hill, Glavac did not do this. He wrote this to me on Facebook about it:

"I was near the top, maybe 50 meters to go. But I didn’t understand the rules completely. I had a chain issue before starting the hill and was dropped before even starting it. So I tried to get up it with least effort as possible so I’d be fresh to try and score points for he next. I’m embarrassed about putting that foot down, it was just bad luck. Not because I had to. I didn’t believe at the time that I’d be DQ’d but Stevo mentioned just before we were leaving for the next about the rules and that I’d have to go back down but still, I didn’t believe it that i was DQ’d. It is OK. I’ll be back. I understand how it all works now."

Glavac won four hills and scored 41 points. So he could be an overall contender in future years. Cooper won three hills and finished second overall with 73 points. Nate Ricketts had scored 34 points on the first ten hills. On the 11th hill (Welsh Way), he broke his frame and was unable to finish. He wrote this to me about it:

"My front derailleur cable somehow slipped, which caused my chain to shift right into my frame, cracking my bottom bracket shell."

His father, 43-year-old Regis, finished in fourth place with 43 points while riding a single-speed bike. Fifty-six-year-old Jonathan Pratt (who helps run the DD) finished in eighth place with 25 points. Fifty-nine-year-old John Brockenbrough extended his oldest-points-scorer record by another year.

Attila Domos rode up the first three hills on his handcycle. He was still badly beaten up from a 24-hour race in California just three weeks before the DD.

Jeremiah Sullivan rode a heavy Healthy Ride rental bike again this year, but this time made it up Canton as the last rider in the last group. However he still didn't make the last two hills. 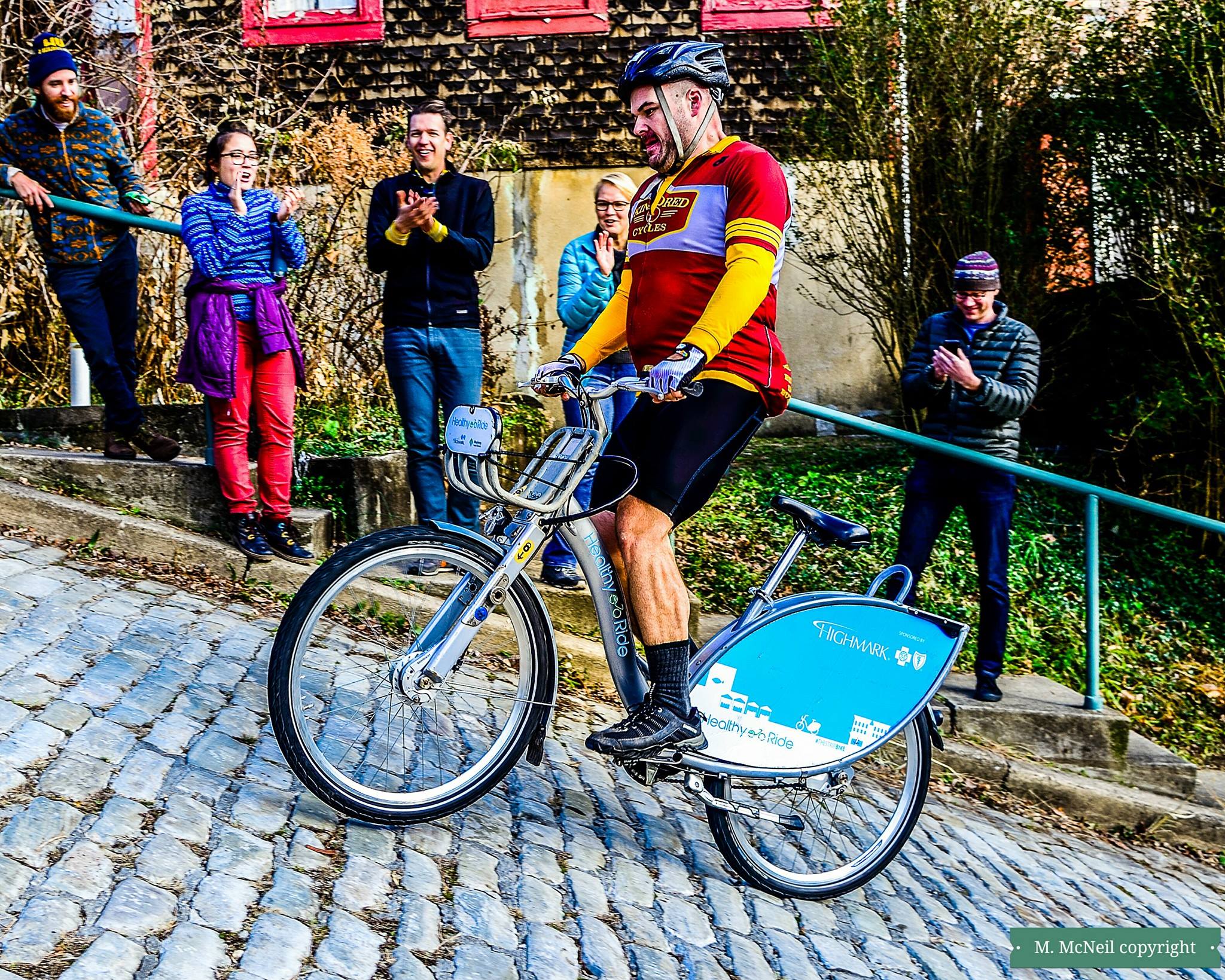 David Mills of Texas became the first unicyclist to start the DD, making the first five hills. He wrote this to me about it:

Rich Flanagan from Maryland entertained the last group by riding wheelies up parts of all 13 hills! 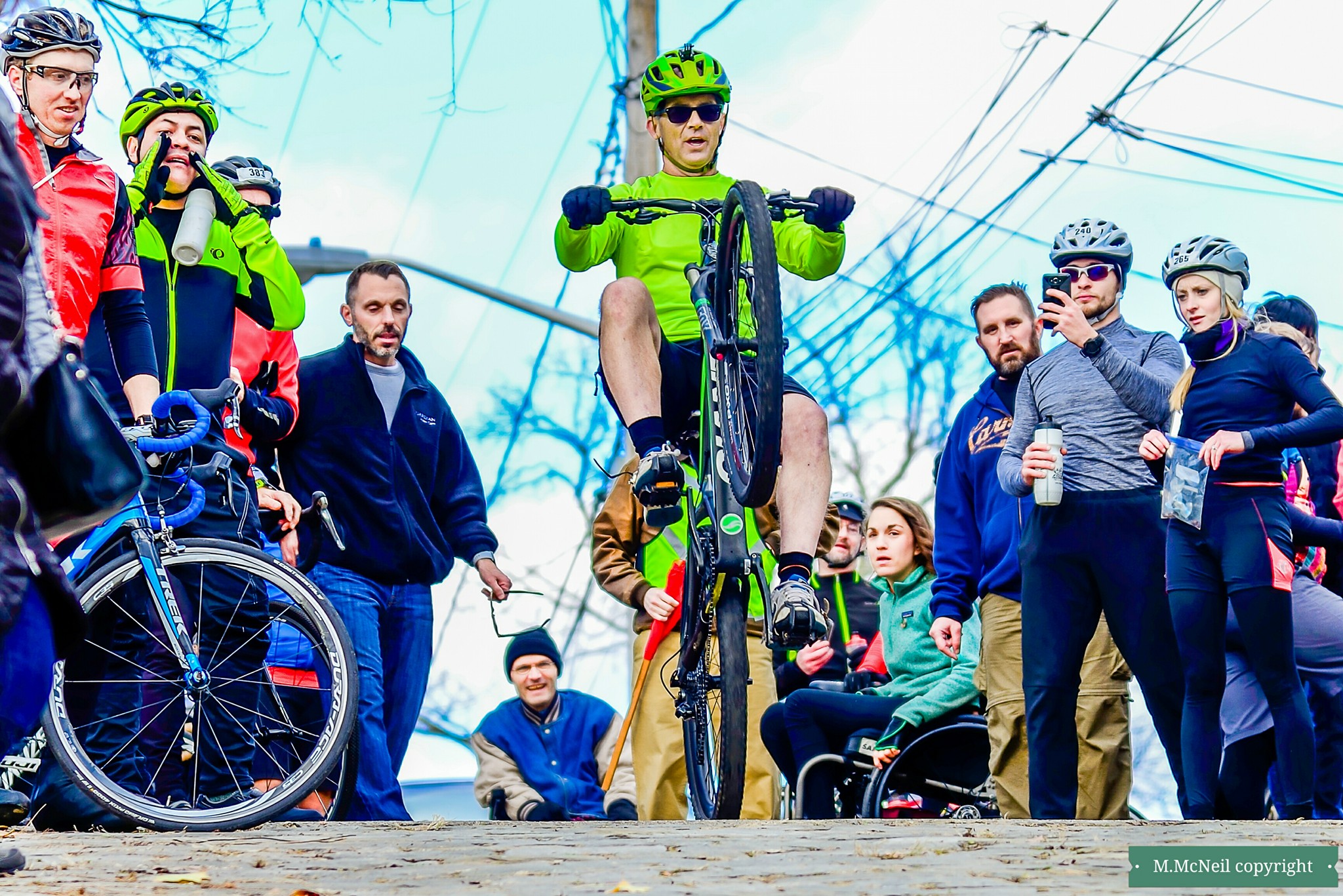 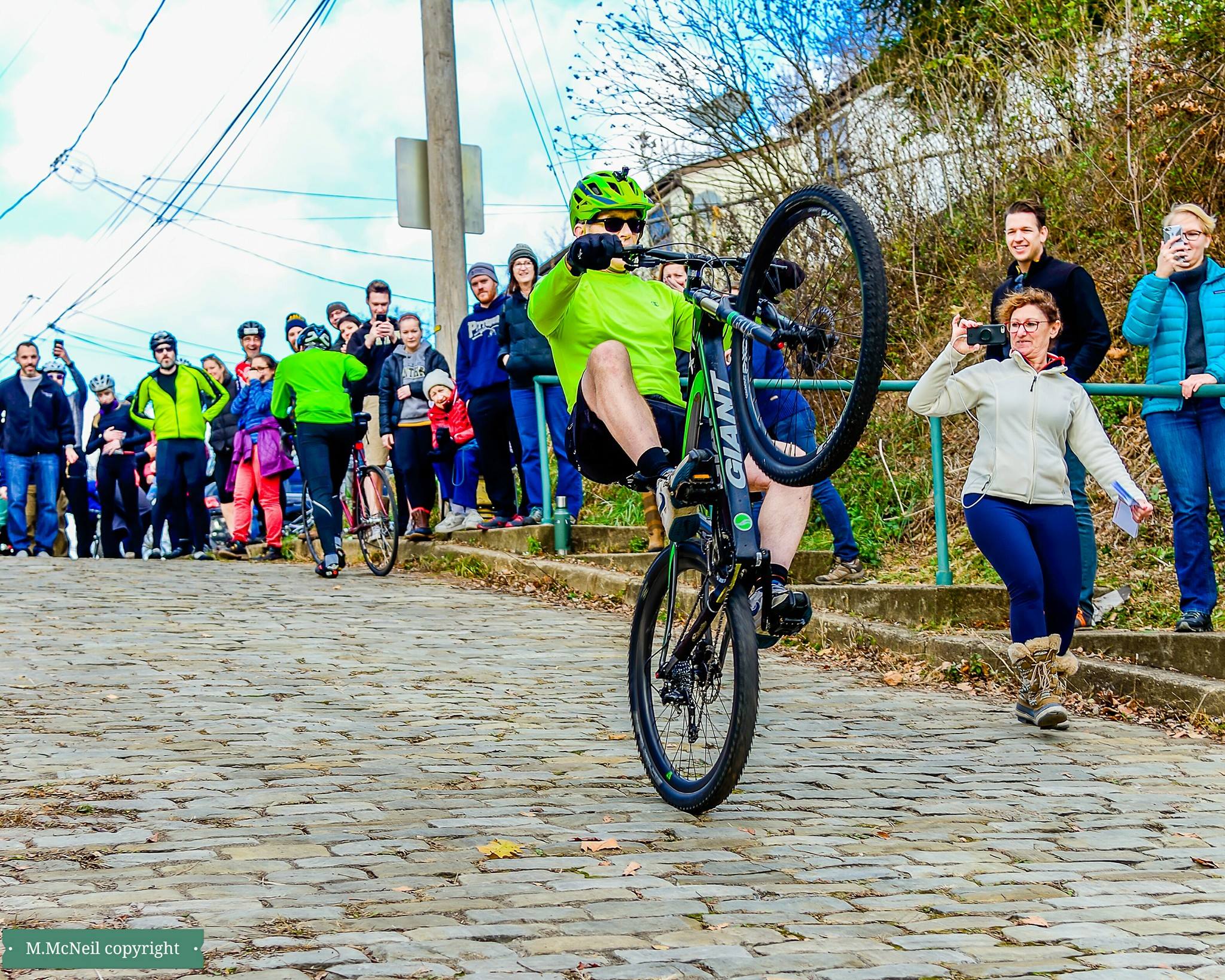 In 2016, he set the Guinness World Record for riding the longest wheelie of 16.07 miles in one hour. His longest continuous wheelie is 40 miles in three hours, five minutes. He wrote this to me about his DD:

"I did not ride wheelies ALL the way up all 13 hills. Unfinished business, I will try next year. Early on, (hill #1), I realized how difficult it would be to ride wheelies all the way up the hills without causing concern to the volunteers who were shepherding the group. No problem, I just waited until the group was spread thin and picked a pocket where I could ride on one wheel without stressing out your volunteers. I did ride a portion and always the top of every hill on one wheel. Canton, I only rode downhill for part of it, I was pretty tired at that point. I also doubt I could have ridden all 13 on a wheelie, I grossly underestimated how difficult the day would be. While I prepared for the steepness of the hills, I had no idea they could last as long as they did. I will be better prepared next year."

In the women's race, rookie Sharon Rana from Ohio won the first hill. Stef Sydlik won the second hill—tying her with Rana, and the third hill putting her into the lead, which she held until the end—winning a total of 6 hills. This was also the first year that Sydlik didn't score any men's points (top ten overall). When the women got to the bottom of Canton, leader Sydlik only had a slim three-point lead over Rana. For the third year in a row, Sydlik needed a second try to make Canton—scoring no points this year. After just two unsuccessful tries, Rana was too scared to try again. She wrote this to me about it:

"Canton was the only one I didn’t make it up. The one right after it (Boustead) was the next hardest but I made it. I was sad I didn’t keep trying, but didn’t want to get hurt since I drove myself there."

Rana won two hills, had four second places, and scored 34 points. So she could be an overall contender in future years. She is the only woman ever able to challenge Sydlik on the DD! Rookie Kara McClain won four hills and finished in second place overall with 39 points. Rookie Taylor Kuyk-White was a close third place—also with 39 points. Here is a photo of the top three women—left to right: Kara, Stef and Taylor atop of the last hill. 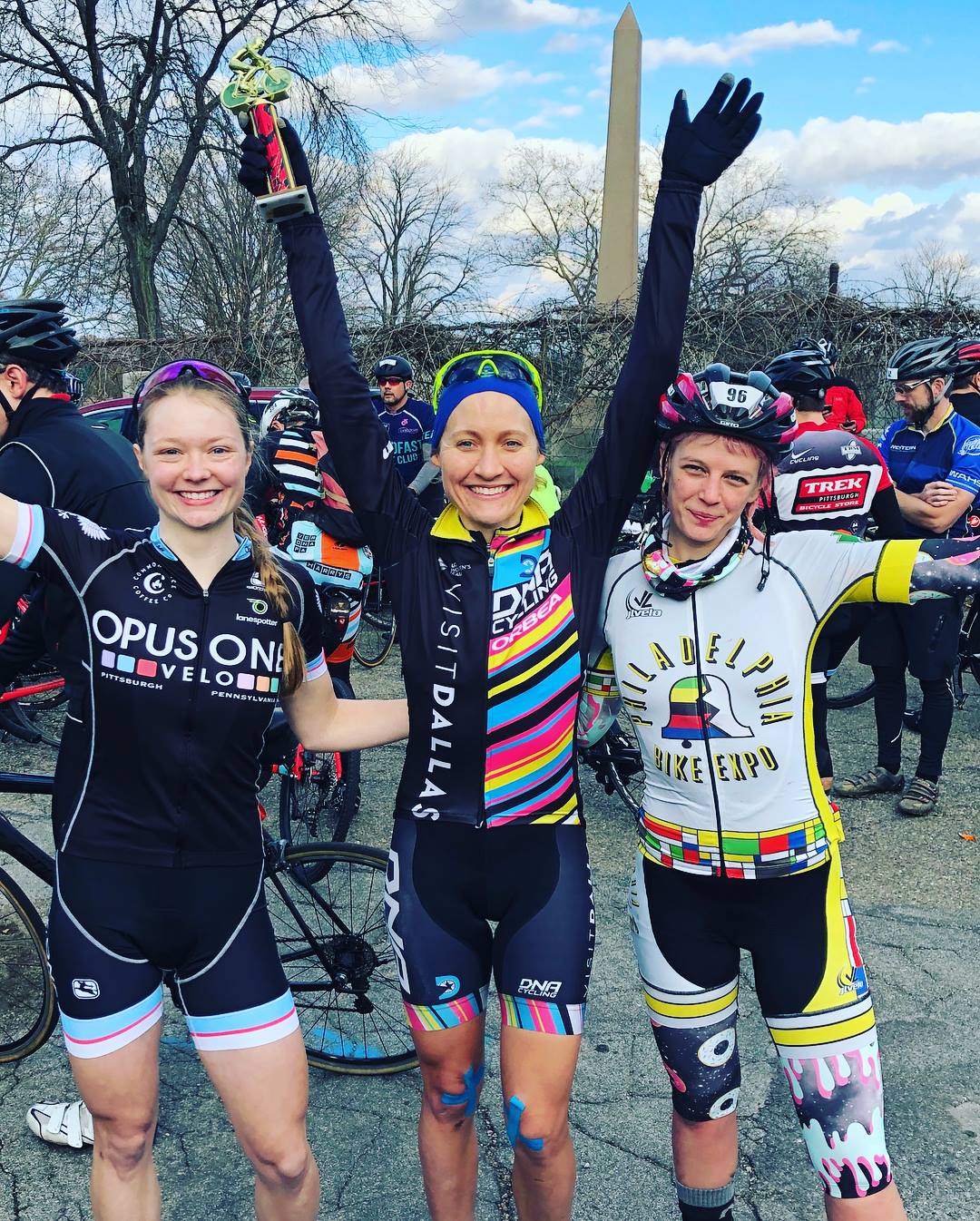 Riding in the second group on a mountain bike, 58-year-old Tammy Killebrew of Texas became the oldest female finisher. 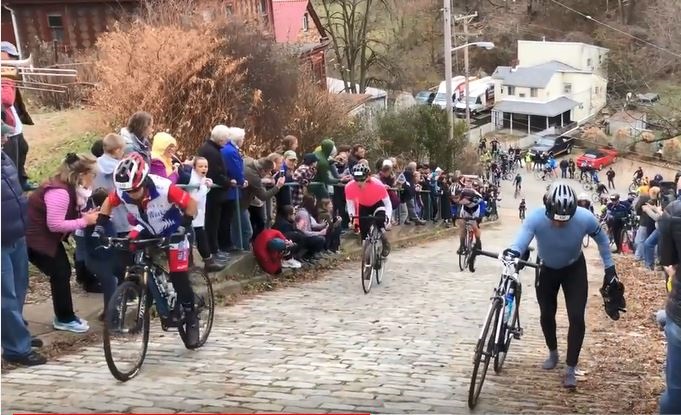 With three wins, Stef Sydlyk ties Betsy Schauer Shogren for the most female wins. Completing her fifth DD, ranger Stef Burch now has the most DD's for a woman. Those riding this year with the most (15) DD's were 11-time winner Stevo Cummings & Ray Russell.

I would like to THANK my huge staff of volunteers: Jon Pratt who organizes, directs the lead points scoring group including whistle blowing at the bottom of each hill, and scores points on several hills. Head marshal/ranger Chris Helbling for creating the different groups, and training these marshals to keep the DD safe. Neil Donahue, Jason McCullough, and the rest of the rangers. Carol Moore & Nina Nacey for scoring points atop of the hills. Paul Pratt for taking video of the hilltop finishes. Ron Lutz and his son Eric and Dave Shaffer and his kids Izabella and Ezra for helping with the food stops. Maura Spillane, Abby Ritter, Monica Reisz, Deuce Bailey, Jill Geisler, Meredith Mimi Colaizzi, Amanda Lee Webb, and Cathy Schnaubelt Rogers for helping with registration.

*First-time rider
†Not an Official Finisher
If two riders end up with the same point total at the end then the tie breaker is who has more wins, 2nds, 3rds, 4ths, & 5ths, etc. if needed.

Thanks to Aero Tech Designs for creating the official 2017 Dirty Dozen jersey and donating a substantial portion of the sale proceeds to Danny, and also for giving out the cool bicycle keychains, and for providing additional staff to help with registration and the food stops.

Thanks to Big Bang Bicycles for donating the men's prize list for the points competition and for providing a support vehicle to aid riders with mechanical problems.

Thanks to Cobden Street Block Watch and South Side Slopes Neighborhood Association for providing hot cocoa, water and a rest room at the top of Eleanor Street.

Thanks to Coffee Tree Roasters for providing coffee at the start of the event.

Thanks to Cycling Fusion for live-streaming the Dirty Dozen.

Thanks to Eat'n Park Restaurants for providing Smuckers Uncrustables peanut butter and jelly sandwiches for the food stops and for miscellaneous other support.

Thanks to East End Brewing for raising substantial funds for Danny, for providing a large number of free tastes for the riders, and for hosting the after-party.

Thanks to NuGo Nutrition for donating lots of NuGo bars, which were very popular again!

Thanks to Red Bull Energy Drink for providing plenty of cans of Red Bull to give riders added pep.

Thanks to Three Rivers Rowing Association for graciously giving riders access to their facility in Millvale.